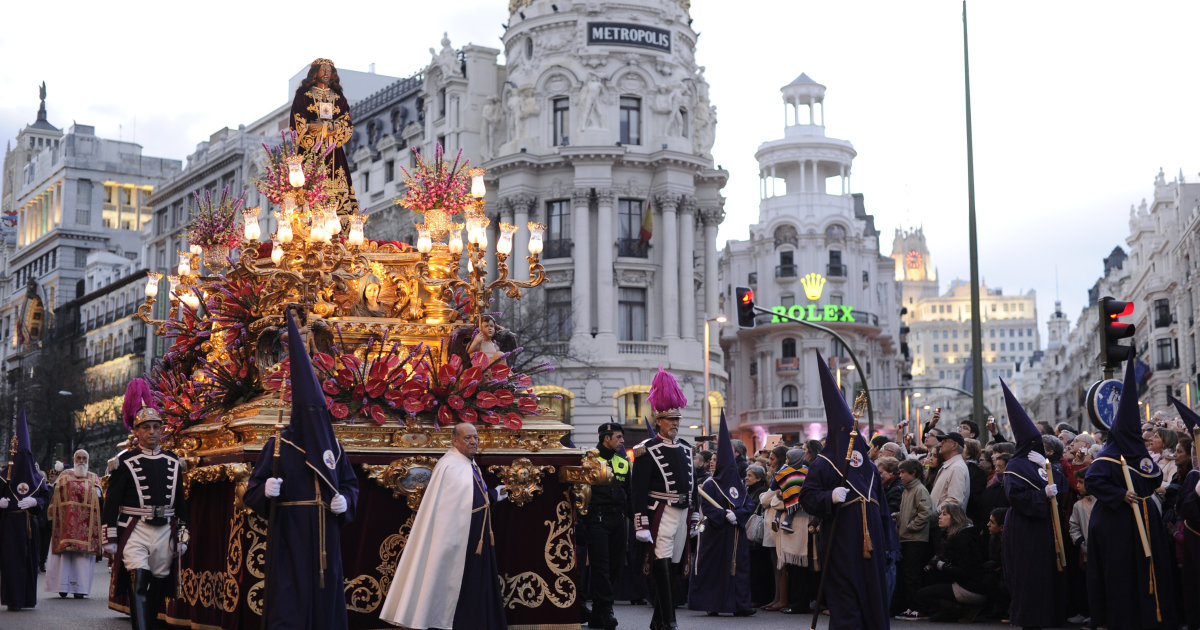 Madrid, as the capital of Spain, offers different options for the enjoyment of tourists during the Easter holidays (also known as Semana Santa), although probably the biggest claim for most people who have never witnessed the Christian cult during these dates are the processions.

The celebrations of Semana Santa in Madrid focus mainly on several different religious processions. If you want to know what to do in Madrid during Semana Santa, throughout this article we will detail a small guide on the main events that take place in the capital of Spain.

The celebrations of Semana Santa in Madrid

The celebration of the Passion of Christ is one of the most important traditions in Spain, and Madrid is no exception. Although, as usual, Spaniards tend to use these traditional occasions more to go out and have fun than to rejoice in the religious origins of the events.

Since the fifteenth century, Madrid has celebrated the events described in the New Testament regarding the death, crucifixion and resurrection of Jesus Christ with the traditional “pasos”.

The pasos are religious icons, which are taken from their resting places in the churches around the city and paraded through the streets on the shoulders of the “costaleros”, usually young people who feel deeply privileged to fight under the immense weight of the religious statues, sometimes balancing precariously on board of heavy platforms. In Madrid there are around 20 religious processions during the days leading up to Easter Sunday.

Domingo de Ramos begins Semana Santa with 2 traditional processions in Madrid. The icon of the “Cristo de la Fe y del Perdón”, an eighteenth-century statue of Luis Salvador Carmona, and the religious statue of “Santa María Inmaculada Madre de la Iglesia”, depart from the Pontifical Basilica Church of San Miguel located in San Justo to parade through the surrounding streets. Some locals often buy palm branches and laurel leaves or laurel as a reminder of the triumphal entry of Christ into the city of Jerusalem.

On Wednesday night, normally around 7:30 p.m., the Archbishop of Madrid participates in the Via Crucis (or Stations of the Resurrection).

Soon after, the brotherhood of the “Cruzados de la Fe” recovers its icon of Christ (Santísimo Cristo de la Fe) from its resting place in its headquarters (Atocha, 87) and venerates its image with a besapié (basically, they kiss his foot).

In the old and historic part of Madrid, the Madrid de los Austrias, the church of San Jerónimo el Real on Calle Ruiz de Alarcón, 19 is the starting point of a procession that involves the Brotherhood of “Nuestro Padre Jesús de la Salud y María Santísima de las Angustias”.

As you can imagine, not only is it very difficult to attend all the processions, but it is not necessary either. So we recommend taking advantage of it from time to time to enjoy Madrid and its usual tourist and gastronomic offer.

Jueves Santo, one of the most important days

The procession of Jesus el Pobre is perhaps one of the most spectacular moments of Semana Santa in Madrid. This is, without any doubt, a procession that is worth going to. It takes place at Calle Toledo, 37, around 7: 30-8 pm at the Colegiata de San Isidro.

The religious images of the Virgen María Santísima de la Esperanza y Jesús del Gran Poder are taken from the church by the “costaleros” through the main door. To do this, they have to get on their knees to make their way slowly, an immense effort that is loudly rewarded with a lot of applause and deafening shouts from the crowd.

At the same time, the processions of Nuestro Padre Jesús Nazareno, El Pobre y María Santísima del Dulce Nombre leave the Church of San Pedro in Calle Nuncio around 7pm, and the image “El Divino Cautivo” is displayed from the Calasancio School in the Calle General Díaz Porlier, 58.

Although they are not such spectacular events, if you are late and you do not reach Toledo Street at least a couple of hours before, they can be a good alternative, as you can imagine half an hour before the procession begins at Calle Toledo not even a soul fits in the surroundings.

Viernes Santo brings perhaps the most emblematic religious procession of Madrid, Nuestro Padre Jesús Nazareno, that leaves the Basilica of the Christ of Medinaceli in the Plaza de Jesús around 7 p.m. and parades through downtown streets such as Puerta del Sol and Plaza Cibeles.

On the other hand, the “Procession of Silence” part of the Church of the Holy Christ of the Faith in the street Atocha 87 and the City Council organizes its own procession called Santo Entierro that leaves the Parochial Church of Santa Cruz in Atocha, 6 with the image of Lignum Crucis.

The procession of “Nuestra Señora de la Soledad” leaves the Corpus Christi Monastery around 4:30 p.m. Take the rest of the day to have a drink and enjoy the local gastronomy, since on Saturday there is no other important event to attend.

The main event of Domingo de Pascua takes place at noon in the Plaza Mayor. It is the “Tamborada del Domingo de Resurección”, in which the Brotherhood chosen that year gathers dozens of drums of all shapes and sizes and performs a constant rhythm that almost shakes nearby houses. This represents the earthquakes that were supposed to have occurred when Christ died on the cross.

And this event ends Semana Santa in Madrid! If you think we have left an important event, do not hesitate to indicate it in the comments. We hope you enjoy it!